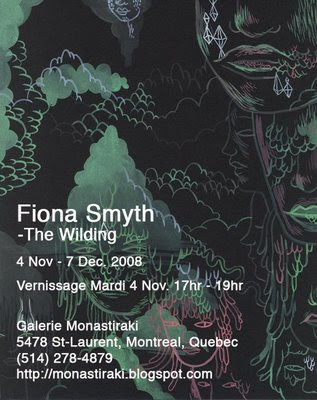 We are proud to present the amazing work of legendary canadian artist Fiona Smyth !


This exhibit (The Wilding) is a continuation of ideas that artist Fiona Smyth has been exploring in her paintings and comics over the last 22 years. The exhibit is a distillation of her expression of femaleness. It reveals a futuristic world populated by female beings and hermaphrodites who are divided into warring factions as their post apocalyptic world is bombarded by jewel-like meteors. In addition to these outer attacks and dangers, the characters are under invasion from within, as their bodies face the after-effects of genetic modification, viral invasions and new unknown traumas. This forms the central concept of the show - survival of the female form and psyche while under constant barrage from outside and within.

This work is largely influenced by manga, which are Japanese comics. In 2004 Ms. Smyth received an OAC grant to travel to Japan and create a new body of ink drawings inspired by the overall experience, traditional ink drawing and manga. In manga, the exploitation and manipulation of girls and women's bodies is limitless and generally filtered through the male gaze. Depictions of all manner of fantastic abuse and transgression are juxtaposed with those of equally unrealistic deification and idealization in these comics. Fiona's work has also dealt graphically with the transformative and complex nature of women's bodies. The Wilding reveals a manifesto of feminine chaos and anarchic survival with its violent and beautiful beings expressing brutality and empathy.

Other inspiration for these works came from outsider artist Henry Darger's surreal drawings and paintings of gender-bending children, Japanese horror films such as Ringu, and the collaborative ink murals of Iri and Toshi Maruki depicting the bombing of Hiroshima and Nagasaki.

The Wilding is further explanation of Fiona Smyth's artistic thesis: how trauma lives in the tissue of the body and is revealed emotionally and physically outside of traditional language.

Fiona Smyth is an artist exploring popular and alternative cultural icons and imagery. Her work always probes these timely societal, sometime intense and always relevant topics with a sense of humour, wonder and catastrophic consequence. She also employs surrealist, abstractionist, spiritual, feminist and pro-sexual strategies to achieve her unique aesthetic. Her use of media also reflects this range of interest by using different formats from which to engage her audience including comics, illustration, painting, animation, music covers, web-based art and her fabulous murals.
Smyth has exhibited in Taichung/Taiwan, Venice/Lido, Jelollabuk-Do/South Korea, New York City, Winnipeg and most recently at the Spin Gallery in Toronto.
Posted by Billy Mavreas at 1:02 pm No comments: