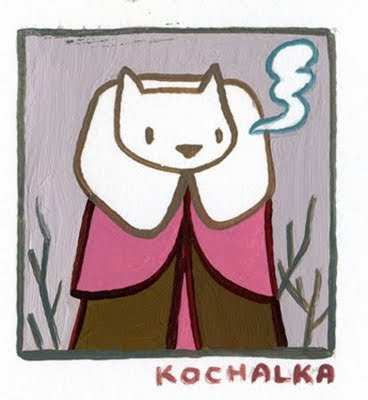 James Kochalka, of Burlington VT has a large cult following for his idiosyncratic comics and graphic novels as well as for his quirky, dynamic music. His comics have been nominated for multiple prestigious awards, winning the Ignatz four times and the Harvey once. His paintings and drawings have been exhibited around the world. His books include American Elf, Monkey Vs. Robot, and the children's series Johnny Boo. Also a rock and roll star, his most recent album, Digital Elf, was recorded in the 8bit music style using a GameBoy Advance. He will be performing songs from the album at the exhibit.

This is an exhibit of very little paintings... all are 2 x 2 inches in size... of cats and aliens and strange little creatures. It's the tender kind of cute, never the cloying kind. There's a depth of humanity to the creatures. Cute, but with soul.

"The reason I paint small, inexpensive paintings is because I believe very strongly that everyone needs real art in their homes. Most of my buyers are young people without a lot of money, and this is the very start of their art collections. I'm proud of that."

Limited edition silkscreen prints will also be available..
Posted by Billy Mavreas at 10:30 am

oooh...why did I ever go back to Holland? I wish I could be there.